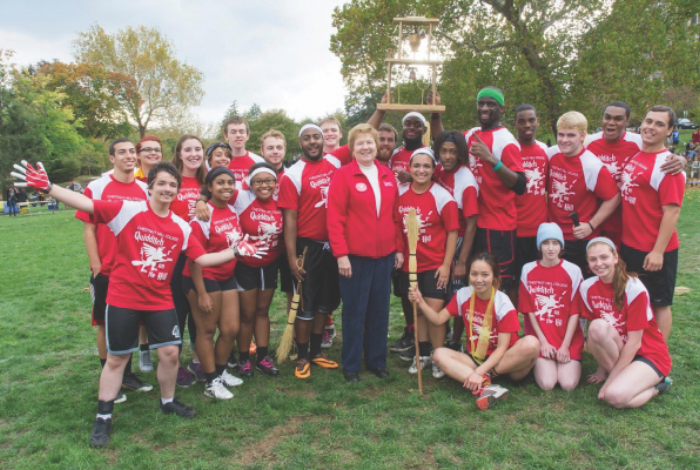 I have had a connection to Chestnut Hill College my whole life. I not only lived up the street from it, but I had family who attended it, an aunt who is a current Sister of St. Joseph, and one who was a former Sister turned employee.

I attended Christmas Eve masses at the Mother House over the years and even went to a few Christmas parties held in the convent. I can remember when I was young my aunts would tell me about the President of CHC, Sister Carol Jean Vale. The one fact that stood out most to me was that Sister Carol let her dog roam the campus with the students! I thought that was the coolest thing and that Sister Carol must be a pretty neat lady.

In 2006, I began my time at CHC. I was excited to join a community that I already felt a part of and one that had campus dogs! Sister Carol was a rockstar in my eyes and meeting her for the first time was like meeting a celebrity. I still get butterflies before I go up and talk to her when I attend alumni events. What an inspiration to women everywhere. A female President, quite unheard of in any field when I was growing up and still rare even now!

Her welcoming personality sets a tone for the whole community. She has the ability to make you feel like you are part of her family. Whether you are a student, a staff member, or a visitor, you are a friend of Sister Carol.

She has guided the college to great success over the years with dignity and grace. When I joined the college in 2006, they had only just gone coed 3 years before. I realize now those years must have been very challenging as a leader, but you never would have known it. From a student’s perspective, Sister Carol has handled every challenge with an open mind and a steady hand. Her positive vision, faith, and hope in her community have helped the Griffins soar through even the most challenging of times. Her determination and her loyalty are unmatched, and so are her power suits.

While I am sad to see her retire, she certainly deserves to kick up her feet after a job very well done!