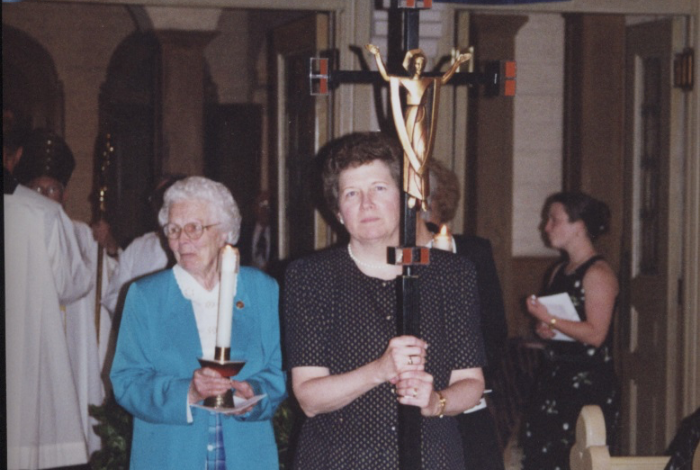 Chestnut Hill College, an inclusive Catholic community rooted in and animated by the Mission of the Sisters of Saint Joseph, is committed to transformative holistic education, just relationships, innovative thinking and responsible action toward a more unified global society and sustainable Earth. (Taken from the Mission Statement of Chestnut Hill College).

Since the life and works of our [SSJ] Congregation are directed to this single end: the union of ourselves and all people with God and with one another, in and through Christ Jesus, it follows then that this purpose requires the Sister of Saint Joseph to be an apostle marked by docility to the Spirit, humility and zeal, expressed in a spirit of gentleness, joy, and peace. (Taken from the Constitutions of the Sisters of Saint Joseph on the Mission of the Congregation).

Since her entrance into the Sisters of Saint Joseph in 1964, Sister Carol Jean Vale has been that “apostle” described in the SSJ Constitutions. Fifty-seven years as an SSJ, Sister Carol has spent more than half of them as President of Chestnut Hill College. With the SSJ mission as her foundation, Sister Carol has committed herself to ensuring that Chestnut Hill College grow steadily in its mission of transformative holistic education provided for thousands of those who have become part of the fabric of CHC over the past thirty years, almost a third of the College’s history.

From strengthening academic programs to growing athletic opportunities, from expanding campus acreage to widening constituent perspectives, from building buildings to strengthening mission, Sister Carol has been in the forefront, leading the way through her own focus and commitment.